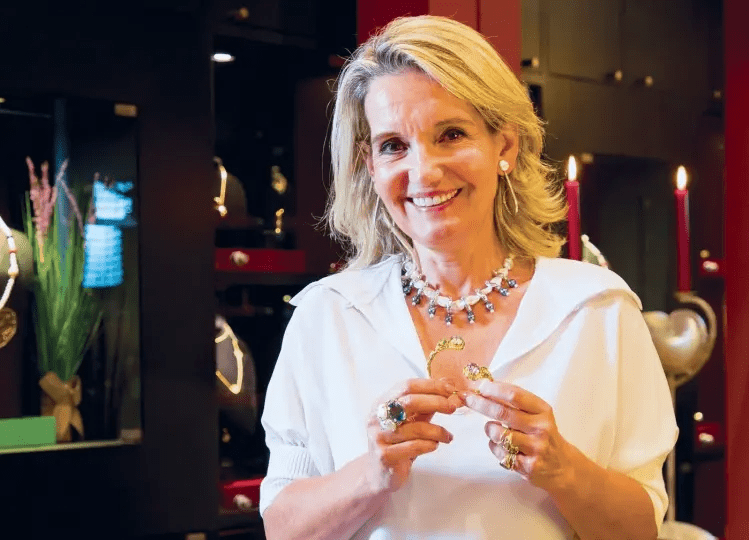 Passionate about the atelier, where she tries to go every day, the designer reveals that in the next four years she will dedicate herself to the internationalization of the brand. Without ever failing to create.

She celebrates 32 years of career, a few more decades of life, and she is sure that she has taken the path she always wanted to take. Calmly, without great daydreams, based on what is still her way of working and running the company: caution and respect.

Maria João Bahia, jewellery designer, jeweler, receives FORBES dressed in gown. “I came from the atelier, yes,” she replies with a smile before revealing that it is there that she likes to spend most of her time, even today.

On Avenida da Liberdade, her space is the only jewellery with exclusively Portuguese pieces. It was in this store that one day a gentleman came in with several pairs of shoes so that she could put all the gold buckles on – and asked for the same on the key ring and other accessories; this is where customers who ask for more or less personal pieces come in, and it was here that she designed and created the reliquary that the Patriarchate of Lisbon offered to Pope Benedict XVI, containing a relic of S. Vicente, which she herself chose and removed from the tomb of the patron saint of the city of Lisbon.

This year she started working on the internationalization of the brand. She has the help of his eldest son, João, who joined the company about five years ago. In 2015, her turnover surpassed the threshold of one million euros – in 2012 she invoiced just over 200 thousand euros – an achievement that she repeated in the last two years.

Therefore, it is time to attack international markets more seriously. “Only now I have time to think about it”, she admits before clarifying that she already works a lot for other countries, although she never ventured beyond works or occasional exhibitions.

Maria João is a woman full of simplicity and direct words. Focused, creative, demanding, she only has one son to work with her, but she made sure to stimulate everyone’s creativity from an early age, at home. Her husband, an engineer by profession, not being an artist, is a lover of beautiful things and the relationship was founded on this duality of passions and professions so disparate.

“We are going to enter corners in our own brand’s name in two US cities as early as spring 2018, as well as in London.” Madrid has already been conquered and the Middle East is also in the pipeline. However, Maria João does not enter any country without absolute certainty that it will be to run well. “I got to be with one foot in Angola, but the truth is that I have a lot of customers who like to come here, so I wasn’t sure”, she says as an example.

She admits that she feels that business today seems to go too fast, not well structured. But that was not how she built her career and therefore does not mind having patience.

“I hate to spend money unnecessarily”, she confides before saying that it was only after 15 years of working in her own brand that she left her first, old and small atelier. “Actually, now that I think about it, it wasn’t fast,” she says, relaxed.

Businesswoman in no hurry

It is, moreover, in Lisbon city center that the story of this artisan begins. She also studied law at the same time as taking a course in jewellery, but the laws lost the race. With a sculptor father, the arts were not, in her family, a strange path to travel.

She devoted herself entirely to jewellery, did an internship at a silverware shop, where he learned how to carve and twine, and then at a jewellery shop “where huge pieces were made, many of them for the United States”.

Suddenly, the opportunity arises to have a small space on Rua da Madalena, which was about to be transferred. That’s when she started working on her own behalf. “In the first two years, I only made arrangements, of course. Nobody knew who I was, ”she explains.

In addition, “there were no women jewelers at the time”, and Maria João was “a girl”. Then she started making her own pieces, in silver – “I had no money for more and I never asked for a loan for anything”, she assures – and the word of mouth started to work.

The contemporary design and delicate lines were winning more and more customers, who were sympathetically attended by Maria João’s mother. “I had to be at the atelier, and go to the customers. My mother helped me a lot ”, for about eight years, she estimates.

“No, I never paid her”, she laughs before explaining that, in the beginning, all she earned was to return to invest. Challenges began to emerge that would boost her career, by showing her versatility as an artist: she designs glasses and tableware for Atlantis, costumes for Filipe La Féria, accessories, belts and wallets in leather and silver for Portugália to sell on board.

More recently, she continues to surprise by designing pieces of gastro-jewelery for Michelin-starred chefs. “I think I was very lucky, in the midst of it all,” she confides to FORBES under the watchful eye of her son João who shoots “but she also always worked a lot!”. The designer shrugs and replies, “Okay, but that was supposed to be”.

This year, Maria João was the author of the rosary that, on the occasion of the Centenary of the Apparitions of Our Lady of Fatima, was offered to Pope Francis. “My mother loved receiving the Popes’ thank you postcards”, João anticipates when we asked him what moments have marked her in a special way in her career. She is unable to account for the pieces she has already created.

“Look… more than thousands,” she says with an open smile. “I never really thought about it,” she says, looking at her son, as if warning that she will need an inventory soon. She continues to be inspired by architecture and nature for her creations – her engagement ring, which was made by her [and bought by surprise by her fiancé] is an example of that, when shouting nature at each curve, mirroring her character as an artist: delicate, bold, resistant and very very demanding.