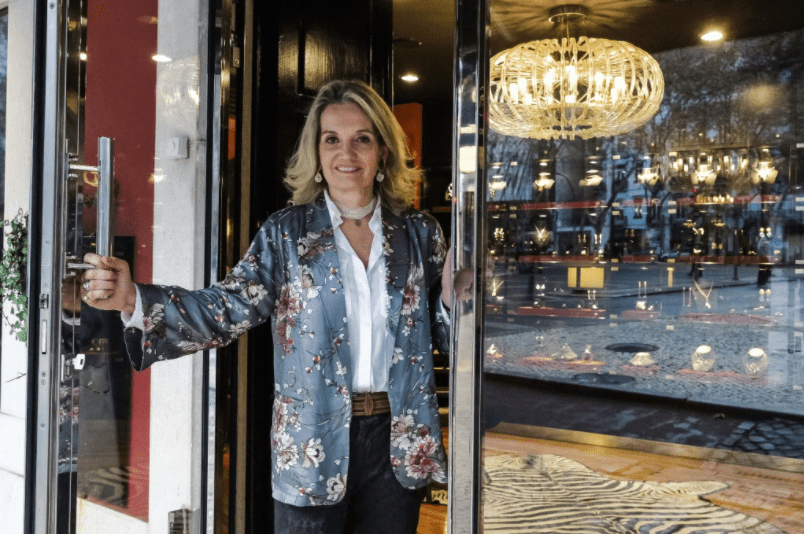 The jeweler celebrated 35 years of career and is dreaming about opening a store abroad, perhaps this year.

What Maria João Bahia most likes to do, as soon as she arrives at the store on Avenida da Liberdade, in Lisbon, which has her name engraved on the windows, is to put on her coat. “It’s how I feel better”, she confesses to Culto, sitting on the 1st floor of the building she bought a few years ago. There is the store, with two floors, the jewelery atelier and the office. It was 35 years ago that her career began, after she abandoned the law course and started a practical internship in Porto, making decorative pieces, and in Lisbon, making jewelry. After starting the internationalization process last year, she dreams of opening a store in the USA or the Middle East.

In Porto, at Manuel Alcino’s atelier, she learned how to make large silver salutes; in Lisbon, at Raul Ferreira’s atelier, she dedicated herself to small pieces of jewelery. “That’s how it started. Then, in 1985, the opportunity arose to buy an atelier on Rua da Madalena [in Lisbon], and with a dose of madness, persistence and willingness, things were happening ”, she continues, recalling that there were“ difficult days ”, but that the “luck factor also helped”. “I immediately had very good work proposals.”

At the beginning she was alone in her atelier, on Rua da Madalena, on the 2nd floor, currently there are eight people working with her, on the avenue where the major international luxury brands are concentrated. Just like 35 years ago, Maria João Bahia continues to design the pieces that are then executed by herself and her collaborators. Unique or limited edition pieces, she stresses. It is in the atelier that she can be found, if she does not have meetings with customers, if she is not called to the store for any special order or if she is not at an international fair. Some customers are interested in transforming or modifying old jewelry. In these cases, the jeweler feels a great responsibility, but also a huge challenge, she confesses. “I like to transform old things without mischaracterizing them and completely dismantling them.”

But it was not the jewels that she designs – “I like organic shapes”, she says – that brought her fame, but the creation of trophies, she has already made dozens and the best known is SIC’s Golden Globe. But there are others: from Revista dos Vinhos, from insurance companies, from football clubs, municipalities, from the Church and from the Catholic University, she lists them, afraid to forget one. “The awards have been a constant, both from national and international companies, we also have many foreign customers”, she informs, adding that there are customers who enter the store with the intention of buying one of the trophies that, obviously, are not for sale.

Maria João Bahia also dedicated herself to decoration and gastro jewelery. In the first case, designing pieces such as candlesticks and silver salves; and in the second case, the pieces that are used by chefs to serve some special dish. These are spread across Michelin-starred restaurants from Europe to Singapore, through Mexico and China. In Portugal, only in Vila Joya, in the Algarve, there are pieces of it, in Dieter Koschina’s restaurant. In a partnership with a Spanish company, “annually we launch 30 pieces that chefs order for specific restaurants”, she informs.

At the store, 40% of customers are foreigners, “many are returning customers” or arrive because a friend has already been there. “It is the word of mouth that works”, she acknowledges. There are customers arriving from Australia and other “more distant countries, which we are not expecting”, she continues to be amazed. These customers buy jewelry whose average price is around 2500 euros. Since last year, parts can be purchased online and shipped to any part of the world.

“Three decades later, where do you go for inspiration?” “To everything”, she replies.. “You get inspiration by working, drawing, seeing, reading, traveling. It is an exercise like that of a high competition athlete who is always training. It is a constant demand ”, confesses the jeweler whose name is an internationally registered brand and who signs and numbers all the pieces.

What does luxury jewelry do? Maria João Bahia starts by answering that luxury is not a diamond worth 500 thousand euros, but it is the “history, the environment, the service, the image that is created around the brand and that creates a desire, a will to have something that is beyond our possibilities ”. However, it does not have to be an expensive piece, safeguard, “if you consider yourself a unique person and a single piece is created for that person, that is luxury”.