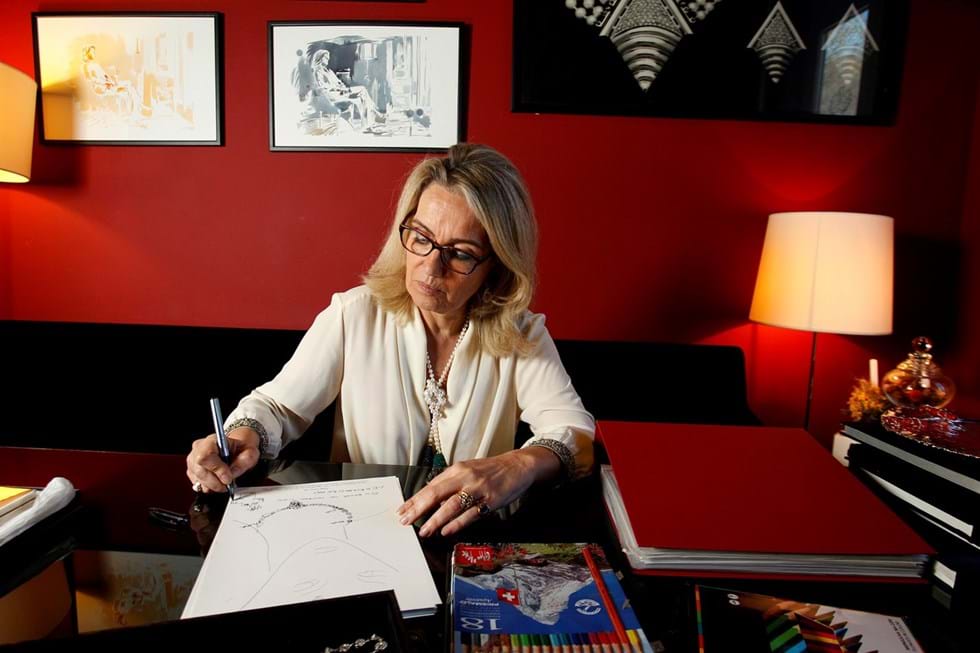 “I was exactly your age,” said jeweler Maria João Bahia, speaking of the date she started her own business. “Although I started the jewelery course in 1981, it was in 1985 that I started working alone.” Today with a consolidated career, the jeweler did not always intend to dedicate herself exclusively to the design and creation of jewelry. She initially made jewelry, but her focus was on law school, which was supplanted by her passion for working in a atelier. “I am from Lisbon and I went to work in Porto to learn the techniques of drawing and chiseling. I learned to work with large pieces of decoration in Porto, and jewelery with engravings in Lisbon.”

Her first atelier was set up at home, but the desire to have a professional atelier led her to move to Rua da Madalena, in Lisbon. She fed the dream with passion and work and was creating her own creative identity. It was, however, when the television channel SIC invited her to create the Golden Globes trophy, at the beginning of the ceremony, that her name began to echo throughout the country. To GPS she admits that this association “does not limit anything” to her route. “I had even more problems when I started to work and was associated with my father [João Charters de Almeida], who was a well-known sculptor, a professor in Fine Arts with a path already made.”

Currently, it is at 102 da Avenida da Liberdade that the jeweller can be found: creating in the atelier being with customers in the office, although it should be noted that the first part remains her favorite. Still, she makes a point of getting to know customers and their stories when it comes to creating personalized pieces. And there are several ways to translate a love story into a jewel (most of these requests are for engagement rings), either by encoding messages or by the meaning of the precious stones she wears. While the details and episodes of the relationship are revealed, Maria João Bahia designs the piece. She sometimes has to redirect the conversation. “How many children do you have? What day did you meet? What color are your eyes?”, Are some of the most frequently asked questions so that the final result has meaning for those who order and who receive the jewelry.

Her signature includes work with noble materials, gold and silver, but also precious stones with unusual characteristics (“I made a series of pieces with rough diamonds, which is a stone that does not have the same price as a cut diamond. , because you don’t know what’s there. It’s a stone with fantastic shapes and incredible light reflections, which can be used to make extraordinary jewelry and objects”) and an easily identifiable creative line: colorful, extravagant and ostentatious pieces. It is in them that the jeweler sees herself. In fact, she confesses that it is complicated to sell them in the end.

Interestingly, Maria João only uses her own creations. One of the pieces that most marked her ended up on her ring finger, when her husband secretly bought it to propose. Among the most unusual is the eccentric request of a foreigner who “brought me a pair of old shoes. Initially I thought it was to fix their soles, but no, he wanted me to make the buckles in gold, because everything he used with metal had to be turned into gold”.

When the pieces are not ordered, it is nature and its organic forms that Maria João will draw inspiration from, which she says is also necessary to exercise. It is not such an intuitive process when it has to be a daily constant. Therefore, for calendar dates such as Mother’s Day, the jeweler launches more commercial collections.

The brand’s last big bet is internationalization. Although the jeweler has exhibited abroad, it is now that she will begin to reap the rewards of these opportunities. Beside her is the middle son, João, who is in charge of managing the business so that Maria João can dedicate herself entirely to the creative part. Looking back over her decades-long journey, she thinks: “Maybe I could have done more trips and exhibitions abroad, but I had my family as a priority. Now it’s time to do what I want and didn’t do: dedicate myself totally to brand.”